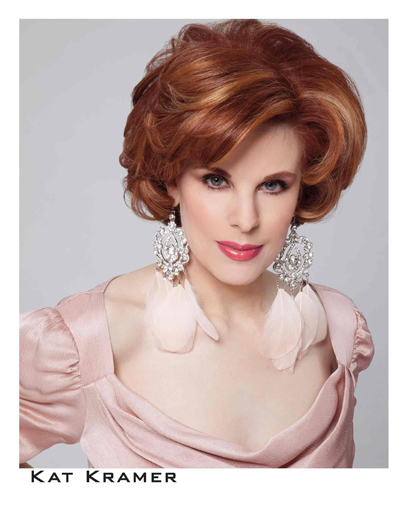 Katharine “Kat” Kramer. Even her name evokes a show business legend. Ms. Kramer  was named after her godmother Katharine Hepburn – and had she been born a boy, she would have been named Spencer, for Spencer Tracy, her father – filmmaker, Stanley Kramer’s friend. Instead, she was named Katharine, and grew up with the legacy of two legends out of the history of show business.

Music has always been an important part of Katharine’s life. She was choreographing ballets at the age of five and was a child prodigy of dance, studying with the renowned choreographer Eugene Loring. For a while, she seemed destined for a future in the world of dance. But somewhere down the line, Katharine changed her mind, and decided to pursue a career as an actress and singer.

As an actress, Ms. Kramer has appeared on stage and screen. She has starred in two popular one-woman shows, The Colors of Myself and Kriss Krossing and won awards for her roles as Helen Keller in The Miracle Worker and Anne Frank in The Diary of Anne Frank. She has also appeared in such films as Hollywood Dreams, Going Shopping, What Just Happened and, recently, Little Fockers. She will also be seen in the upcoming film Katie Q, with Karen Black, Paul Sand and Zack Norman.

As a singer, Ms. Kramer is recording Gemstone, an album of Mick Jagger love songs, each as a duet with a different artist who has previously worked with Sir Mick. As a producer, she is developing a web series about the making of her album, titled My Duet with Mick. Ms. Kramer received a rousing ovation with a special musical tribute to her friend and mentor Lily Tomlin at the Pacific Pioneer Broadcasters Awards in February 2012.

Ms. Kramer previously received the “Compassion” Award from the Braveheart Women’s Organization. A fixture at Hollywood events, Ms. Kramer has headlined at awards shows and galas for such luminaries as Robert De Niro, Joe Pesci and Shirley MacLaine. Ms. Kramer, who is the goddaughter of the late Katharine Hepburn, proudly serves as the West Coast representative of the Katharine Hepburn Cultural Arts Center. She recently sold-out her first acting workshop for “Meet The Biz,” and will be launching “An Evening With A Trailblazer” with David S. Zimmerman in 2013, She is also debuting a new one-woman-show. A former Miss Golden Globe, she resides in Los Angeles.